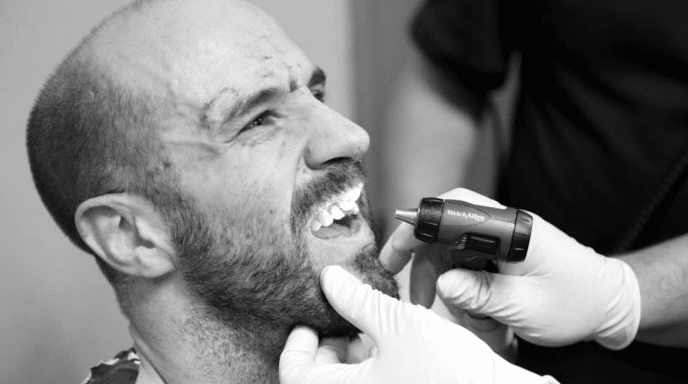 WWE No mercy Cesaro received stitches during emergency dental work, says he still finds it difficult to bite with his front teeth.

Cesaro continued in the ring again after he lost his front two teeth. On the night of September 24th in Los Angeles California, he underwent emergency dental work. He had a brutal fall on the ring post that night leading to this dental trauma.

It’s been eight months since that night and he still finds difficulty in chewing. Without any rest he still continues wrestling as Cesaro is a true legend. WWE star Cesaro flashed his smile after his teeth were knocked our because of the sling shot on the ring post.

Dental trauma is a time dependent recovery process. Precautions such as wearing a mouth guard may reduce such incidences. Nattie also tweeted “I’ve so been there” @ Cesaro teeth updates.

Superstar Cesaro had given the press an update on his dental injury. At the no mercy pay per view, Cesaro the swiss wwe star received a slingshot into the ring post that dislodged his teeth a few centi meters into his upper jaw also called the maxillae. The dental implant procedure is done to restore teeth in such cases. Even in 2018 he continues recovering and says that he still finds it hard to bite anything with his front two teeth.

This had happened to Mike Foley as well. The impact was received by a steel chair while competing in a hell in a cell match with The Undertaker. Jeff Hardy also had a tooth knocked out by Sheamus during the PPV in 2017. Therefore it left a gap in his white flashable smile.

Thank you for reading! Have a pleasant day.